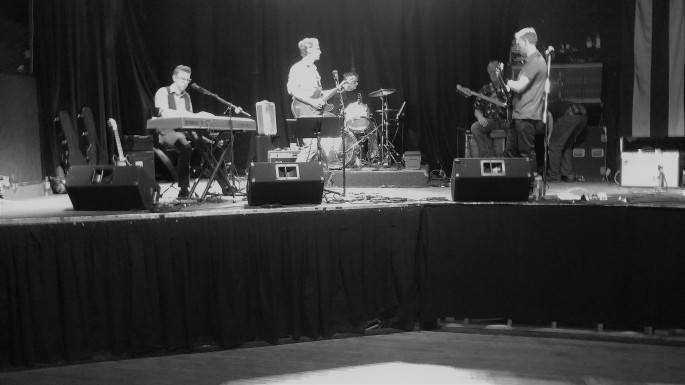 I was with a group of dancers on two occasions to see a newer blues band from the Twin Cities area at the Minnesota Music Café in St. Paul, MN. With one family of two generations, Tim the bass player is the dad of Dan the keys player and Lead and Rhythm guitar Andrew.

The other guys in the band Brad is on the Drums and Dan on the other lead and rhythm guitar. They are not related, but all of these men said they are family in the sense of music family.

I found this band to be a pleasure to dance to and listen to. Many of their songs are originals. What talent in this band. Not only do they write their own music but Tim is new to playing the bass guitar and plays it upside down! Does it affect the music? Absolutely not, I can feel the bass in the music the low bass sound with the rhythm that keeps the beat going. In some songs, I can feel the emotions played in the bass which makes the songs feel alive.

Dan on the keys said to be a better player in the band it takes lots of practice, and that would be the advice he has for anyone new coming into the music world. Dan also said find other who like music and practice with them. Dan is alive on the keys with passion and love. You can feel it when he plays.

Tim had a great smile and lots of energy he also said it takes lots of practice and they play in the basement to practice. His keys make the melody uplifting and with feeling. Almost like an Angelic voice. Tim also said that practice is the key for anyone new in the business. Tim said he enjoyed playing with the guys. Tim is one of the singers with solos or blended voice. Strong and steady and never off key with emotions with each song. What a blessing.

Andrew was in Louisiana then came back home where he started back up with the “band.” Andrew sings and is one of the lead guitar and singer. I have seen him go out with his guitar in the audience and work his magic with the strings. The guitar dances with music and feeling when Andrew is playing. The crowd loves it when he comes out. I felt a connection with the music Andrew played and the present of a great singer.

The other Dan and lead and rhythm guitar player also sing lead and backup. Tall handsome and full of love when he plays his guitar, I can feel the emotion, and the blues come out swinging with rhythm and passion. Tim said it takes lots of practice to be good at playing the guitar and playing in the band. Dan also has a bit of humor, we joked about my interview skills. He is defiantly a heartthrob with the ladies.

Last, there is the drummer. Without the drummer, there is no beat. That is Brad, the heartbeat of the band. Brad starts the songs off right on the beat and keeps them on the beat. Brad also said he loved this band and they are like family to him. He said it takes lots of practice to be good, so anyone starting out needs to practice.

I love the music these guys create and lovingly play. They all play in harmony, have only been playing together for a few years, but are better than some of the bands I have heard that have been together for 20 years. I love the mix and blend of Chicago blues, blues, Southern blues and a bit of soft rock in their music. They have a new and upcoming sound that is their own. I predict they will be the next up and coming stars in the Blues Community. With the talented three well-blended singers it is very danceable and listening music. I loved the two lead guitars doing the individual extraordinaire solos together.  It was almost like dueling guitars. This is one of my favorite bands to watch. Congratulations guys you are on your way to success!

You can find their homepage on their facebook page.